I can’t believe that I’m currently writing my 100th post after more than four months in WordPress’s blogging community. Time flies so quickly! Before I come to the point of this post I want to thank you all for being here -virtually- and reading my blog. I’m so grateful to all of you for supporting me in my writing/blogging path. Love you all guys!

Now to the main subject: as this is a special post I wanted to share some advice… Or anything that might help you. I like my posts to be useful, productive so that at least I know that my readers will have learnt something or enjoyed this reading moment. I want that my writing contributes to at least making you smile. 🙂

We writers usually write to create a particular effect to our readers, to pass a message to the world.

This is how writing is an art, a passion.

But of course, the whole process is hard and especially for  beginner like me. If you’ve been following me during NaNoWriMo you know that I’ve written a fantasy romance novel called ‘Burning in Heaven’ and that even though I won (could make it to 50,000!) I still haven’t completed my novel. In fact the hardest part has yet to come: editing. Believe me, writing fantasy really requires hardwork. For now I’m still writing the first draft. And I thought that I would be quickly done with that… if it wasn’t for the mistakes I made.

Yep I made terrible mistakes… And I’m going to list all of them for you to not repeat it, especially if you are as inexperienced and unpublished as me 😛 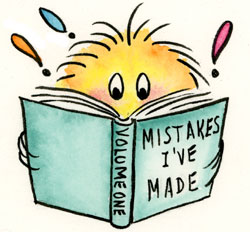 My list of writing mistakes and advice I learnt from them:

1. I messed up with the chronological order of the story

In fact I wanted to use the flashback technique to tell my story instead of simply following the course of the story itself. What I mean by the flashback technique is what Stephen King did in The Dark Tower IV: there’s of course tge usual introductory chapter where all the main characters and their purpose are exposed, then the rest of the book deals with an event that happened years ago. This kind of technique is mainly unapproved by most writers as it is rather hard to master due to it slowing down the main plot and action of the story. Time is stopped to tell the flashback and this delays everything in the book. Stephen King is a writing genius though that’s why he could do it and be successful, but I’m not.

But as I’m so attracted to complexity I wanted to unveil the plot of my story in an inorderly manner so as to intrigue and confuse the reader thinking that it would make the reading more interesting… Then gradually I would reveal everything in a long flashback. But I’m not experienced and mature enough to use such a technique appropriately. The main plot was really slowing down and the reader could easily get bored and fed up of knowing only about the past then abruptly come back to the present time only to ask himself: wait! What happened before these chapters of flashback? Totally forgot…
In the end I had to rearrange everything and add a couple of more scenes…
So please, follow your story’s timeline. Don’t try to meddle with time… At least for the time being 😉

I know that for NaNo we all have to rush to reach those 50,000 words before the end of the month but in reality, I mean, when you write out of the NaNo thing, you do not need to hurry. After NaNo I wanted to keep on moving as quickly as I did in November, i.e. 2000 words a day, but forcing yourself to write is not a good idea and will tire you. You should go at your own pace. Someone wrote (sorry I can’t remember who and where/when) that 500 words is enough for one day, because quality is much more important than quantity. Even 100 words/day is accepted as long as you write with love and dedication 🙂 Notice that if you write too much too hastily you will end up rewriting and deleting a lot when editing your manuscript, whereas if every sentence, every phrase, every word has been chosen carefully since the first draft, there will be less to do on the second one.
Don’t rush and end up realising that you have to rewrite everything.

3. I tend to make repetitions.

If you have that problem, if you make this annoying mistake, just try to read a paragraph of your work aloud at one go and then you’ll hear how repetitions can be so ugly.
In fact telling the story aloud helps to choose the right word because not only you see the words and sentence structures, but you also hear them, thus it’s easier to find what’s wrong.
I also recommend buying a synonyms/antonyms dictionary. 🙂

My English teacher always tell us to “add realism to your composition”. Of course it’s easier said than done for beginners. Also a composition of 500 words is easier to master the degree of realism than in a whole novel. I’ve seen that my story sometimes lack realism. It seems too surreal, fictional… It’s true that the story is fictional but a reader should be able to slide into this imaginary world we’ve created by words and believe that everything we’ve written is actually true (I mean it is possible that the things mentioned could happen…). For example when you read books about vampires, faeries, witches, there’s a moment when you tend to think: can this be possible?? Will I find my vampire lover too?…

Things like that… these thoughts happen… because the author succeeded in transporting the reader into their world and make it appear as real as your school bag! They add realism to the story and this is thanks mainly to good descriptions, dialogues and characterisation. Sometimes small details like the surname of your main character or the street name where he/she is living makes the context of the story more… real. Even though the place never existed or is not even on Earth. Know what I mean?
Everything must be clear to the reader. When he/she reads your book he/she should believe he/she is actually watching, seeing the story in front of her… or best: he/she must feel that he/she is in the story… It must feel REAL.

Ah so many articles on the web have been tackling this subject… even dailypost.wordpress.com mentioned it if I’m not mistaken.
When we were small, we wrote things like: “She was surprised.” But now we should write: “Her jaw dropped down.” or “Her eyes almost burst out of their sockets.”
Stay inspired 🙂 Try to twist your sentences.

6. The overuse of Adjectives

For NaNo, to write as much words as possible, I’m sure most of you used a lot of adjectives only to describe one little detail… (I did and I still do it and I hate it but sometimes I can’t help it… terrible mistake!!).
E.g. “She had long, dark, straight, shiny hair.”

I typed ‘overuse of adjectives in Google Images… and here’s what I got! LOL!

I think that the best way to put all this information in your novel… is not to put it in one sentence. Don’t gulp all the food in a minute. Because we are aiming at writing a novel, we can allow ourselves to gradually input information. For example you could describe her hair as being as dark as ebony wood when presenting the character, but you have to choose only one characteristic of the hair: the most important one depending on your story. Then as the story goes the reader will gradually realise that it’s long and straight… Don’t rush it all in a heavy description. The amount of words and chapters are unlimited… so better take your time ^^

6. And finally… Allow yourself some rest 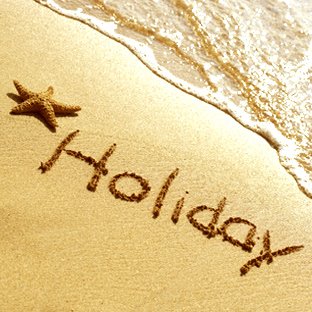 Really, it’s holiday time! Christmas time! But stressful time for most of us, because of all the preparations, family gatherings, gift exchanges…
It’s also fun though 🙂 and in any two ways, it’s tiring!
So please, take a rest from writing for some time, i.e. if you don’t have a deadline or whatever. After a whole month of writing like a mad person, I’ve decided in December to slow down… and during this festive period… I think I’ll give it a break. We need to breathe. Relax. Just put your manuscript away for some time, it will do you good! Believe me 🙂