Hi everyone! On this New Year’s Eve, I’ll be doing everything that needs to be done for this last day of 2012, mainly, the WordPress Weekly Photo Challenge: My 2012 in Pictures, the WordPress annual report, some ramblings on the 2012-13 transition…

First of all, for this week’s photo challenge, it was suggested that we present 12 photos at least in a gallery to make an overview of 2012, but I’m going to break the rules and thus here’s my contribution:

What does this photo have to do with my 2012 in pictures?

Well, for me, 2012 has been like… a story. A story full of adventures, stakes and peaks. Life is a story. And I might be an aspiring writer and write stories, I can’t write my own.

That makes it even more interesting, right?

So someone (Fate, God, or whatever you call it) is writing my life at present…

Anyway, to give an overview of this year, 2012, I’d say that it has been a year when I have been the most happy girl in the world yet the most miserable one as well. Indeed, happiness comes with a price. I’ve laughed and shed tears.

It’s as if this year has shown me both ends, both extremities: the good and bad. I’ve been like pushed and pulled constantly.

It’s been a yin/yang year for me.

Nevertheless, I say it out loud/I write it in bold characters:

I have no regrets.

Everything that’s happened this year has occurred for the best, I believe (or I’m trying to persuade myself). Everything happens for a reason. A meaningful one.

I don’t really remember how I began 2012, I guess in a very happy mood, since it’s (I admit) in a sadder mood that I end it today. Yes and I admit again, I’ve been much depressed at the end of December for personal reasons, yet, for other reasons, I have been the most blessed girl of the world.

Firstly because of my novel-in-progress, because I love writing and I’m so excited to do a second draft/the editing process! Keeping up with that project makes my day every day. And I can’t wait to polish it and finish it to show it to you!

Last but not least, the reason I keep smiling everyday… is YOU! My dear readers and the whole blogosphere of WordPress!

Before I actually wrote this post, I went back to the posts I did one year ago and I found these two:

Go and read them 🙂 For the first linked post, I’m still keeping the same tradition this year and in a few hours, I’ll be writing in my wishes copybook! (What is this? Go and find out in the above link!)

And for the review… I compared it with this year’s blogging review which says:

The WordPress.com stats helper monkeys prepared a 2012 annual report for this blog.

And I definitely made a huge progress! I’m so glad of being in the blogging community! You always make my day, guys!

That’s why I’m wholeheartedly wishing you all a…

I admit I’m scared of what awaits me in 2013. It’s going to be a serious year, because of my A-levels, and I’ll also turn into an official Adult… well that’s exciting!

I don’t really know how to explain, but I’m apprehending the new year. I have a bad feeling about it. Or is that simply because I’m going through a depressive phase at the moment, that will surely go away soon? 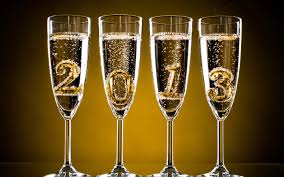 Anyway, I wish you all the best for the new year. Good luck, and bloggers, keep it up! I’m sure you got that awesome review on your blog as well 🙂

And potential writers, keep on writing!